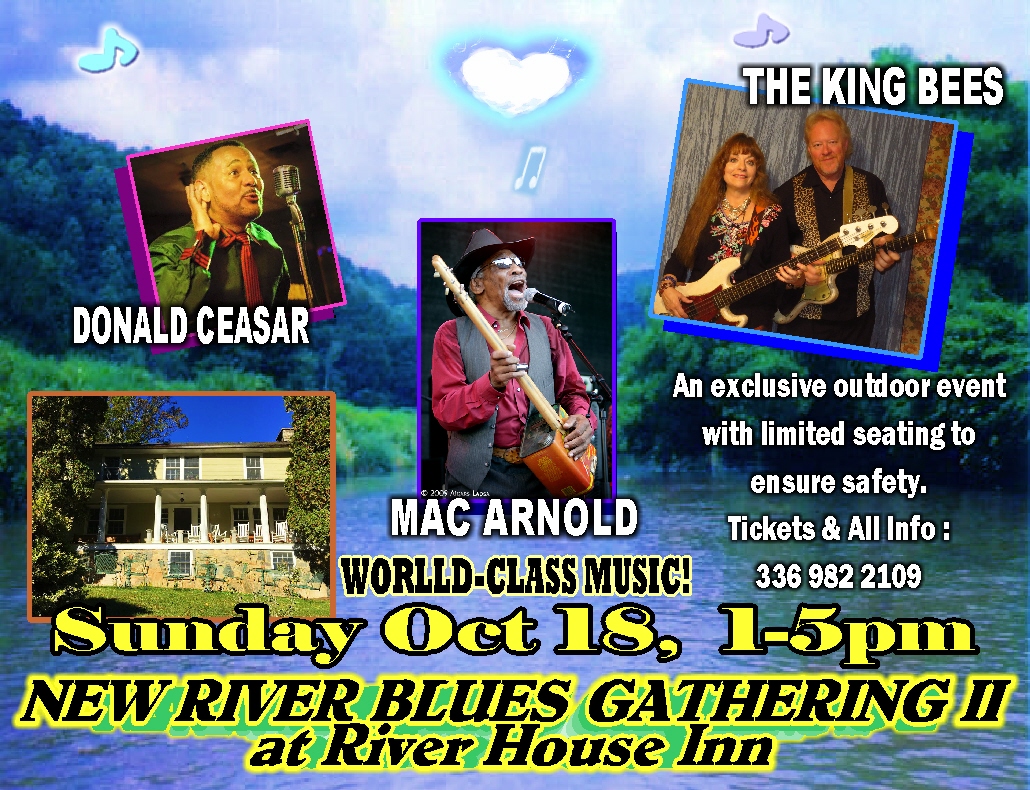 Not a festival this year, BUT! we continue to keep the Blues alive in the High Country! Because our first Gathering was such a success and left folks wanting more, we present NEW RIVER BLUES GATHERING II AT RIVER HOUSE INN~ An exclusive, intimate outdoor event presenting world-class music. Sunday Oct. 18, 1-5 pm Tickets by phone reservation only: 336 982 2109, River House near West Jefferson. NO TICKETS SALES AT GATE.

**We highly recommend the gracious accommodations that have earned the River House Inn it's stellar reputation, so make a weekend of it!

*Limited tickets/seating to insure safety and to follow state restrictions. $50 advance tickets for purchase at: 336 982 2109.

.*On the lawn and of the gracious manse overlooking the beautiful New with plenty of room for social distancing. We ask our friends to please bring masks. Feel free to bring blankets, lawn chairs, canopies, also seating will be provided. The meadow by the river will also be available to ticket holders.

*Please, no coolers. River House will have available for purchase their excellent fare  and beverages.

MAC ARNOLD-When the piano player in your very first band is none other than James Brown, you know that amazing things in music lie ahead. That's how it was for Mac Arnold. In 1965 Mac moved to Chicago and was soon given the stellar position of bass player in The Muddy Waters Band, the band that shaped the bedrock foundation of classic Windy City blues. Regular guests of the band included Eric Clapton, Paul Butterfield, and Mike Bloomfield. Mac and the band often provided the backing for all the biggest blues legends. In the '70's Mac moved to Los Angeles and produced Soul Train with his friend Don Cornelius. He even played bass on the Sanford & Son television show between gigs with Otis Redding and B.B. King. A highlight of Mac's performances these days is when he returns to the fundamentals of his music and plays his homemade gas can guitar. This show is one to fully satiate the appetite of real-deal blues fans who want the very best, authentic fare.

DONALD "BLUEZ EMPEROR" CEASAR is an artist of exceptional versatility, performing on drums, harmonica, and keyboards while singing with gusto and laying down high-spirited dance steps. Ceasar hales from the bayous of Louisiana, in the heart of Creole and Cajun country where his grandfather, Alphonse “Bois Sec” Ardoin and other family members were pioneers and founding fathers of Cajun Zydeco music. Ceasar has been entertaining audiences since childhood with his Cajun family band and opening for and sharing the stage with legendary artists such as Rocking Sidney, Fats Domino, Dr. John, The Nevilles, B.B. King, Allen Toussaint, and James Brown. Ceasar delivers a sizzling musical-gumbo full of the succulent flavors of Louisiana. "..possibly the hippest entertainer performing in the Carolinas.” Jim Otis, The State, Columbia,SC.

THE KING BEES, Rob "Hound Dog" Baskerville and Penny "Queen Bee" Zamagni call the mountains of North Carolina home, but travel the world with their Blues and American Roots music. This year marks the 33nd anniversary of the band and also the 18th year of New River Blues Festival (this year the Gathering) which they created and produce. The King Bees have performed on festival stages in European capitals including Paris, Rome, Amsterdam, Stockholm, and London and have taken their internationally-acclaimed show across numerous countries. Their love of American Roots music has carried them to shows in Mississippi jukes joints as well as to several performances at Lincoln Center. In 1986 Baskerville and Zamagni began traveling the deep-South searching for and mentoring under Black Blues artists of historical, cultural, and musical significance. Many blues greats took them under their wings and guided The King Bees toward the sound of authenticity. By 1989 they were touring and recording with their mentors. Over the decades they were signed to an international label, collaborated with Rock n' Roll Hall-of-Fame member Bo Diddley, and were featured on The B.B. King Birthday Tour. The King Bees have shared the bill with Dr. John, Buddy Guy, James Brown, Leon Russell and a host of other legends. Known for their professionalism, showmanship, and soulful performances, the King Bees take the stage to stir hearts and mightily move spirits.