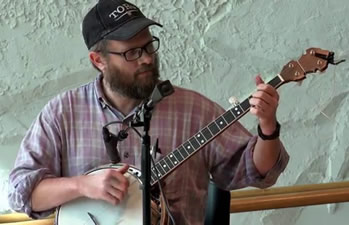 Lucas Pasley lives in Alleghany County, the home of his father's family and the place where Lucas spent summers while he was growing up. He has immersed himself in the local fiddle and banjo music from "the border country," between Alleghany County, North Carolina and Grayson County, Virginia. After he graduated from Appalachian State University in Boone and took a position teaching high school English in Sparta, Lucas and his wife, Iboya, moved to Sparta to settle down.

Music, for Lucas, has been a way to pursue a personal interest and to reconnect with his family. He began playing fiddle while he was a student at ASU when he became friends with Trish Kilby Fore, a clawhammer banjo player from Ashe County. When he met Joe Birchfield, of the Roan Mountain Hilltoppers, he started to visit him as often as he could. After digging into family history, Lucas discovered that Guy Brooks, the fiddler for the Red Fox Chasers, was his great uncle, and his grandmother's cousin, Faye Wagoner, was a noted old-time guitar player who had played every Saturday with the Caudill Family (Joe, Clell, and Bert) for many years. He began visiting her regularly. He also became acquainted with another cousin, Fred McBride, who was one of the last fiddlers of an older generation.

Since settling in Sparta, Lucas has become very knowledgeable about music of the region and has spent time learning a lot of the fiddle music from Alleghany County that is rarely heard anymore. He focused on the recorded music of older musicians from the area, such as fiddlers Hus Caudill, Howard Joines, Bertie Dickens, Emmett Lundy, John Rector, and Charlie Higgins. With Kilby Spencer, he released two CD's through the Field Recorders Collective of fiddle and banjo music from Alleghany County (FRC712, FRC 719) and a CD of his playing with Fred McBride (FRC722). He also release a CD titled Stratford at Bow which focuses on versions of fiddle and banjo tunes from the area (available on CD Baby).

Lucas has played at such places as Blue Ridge Backroads, Blue Ridge Music Center, Berea College, and the Blue Ridge Folklife Festival and has won ribbons at numerous fiddlers conventions. In 2017, he formed the oldtime band Gap Civil with Chris Johnson on banjo, Caroline Beverley on guitar, and his wife Iboya on bass.