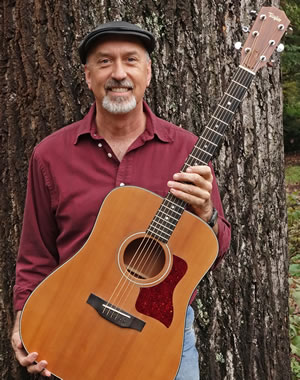 Inspired by acoustic singer-songwriters such as Paul Simon and James Taylor, James Vandenberg picked up the guitar at age sixteen. After learning the basics, he quickly moved on to electric guitar. Drawing further inspiration from rock and jazz guitarists such as Pat Metheny, Larry Carlton, and Jeff Beck, James developed fluency in a wide variety of styles. He started playing professionally in the early eighties, and went on to play with a variety of rock, fusion, jazz, pop and bluegrass groups in southeast Michigan. He brought his versatile and tasteful chops (as well as his strong tenor voice) to the Asheville area in 1998, where he has shared the stage with some of the area’s top musicians. He currently plays original music with the Robert Thomas Group, and he also plays and sings with Asheville singers Peggy Ratusz and Paula Hanke in their Linda Ronstadt tribute show "Love is a Rose".

In addition to all of these collaborative projects, James loves to sing and play simple acoustic guitar among small gatherings, revisiting the old folk and pop songs that first attracted him to music nearly forty years ago. You will likely know the songs, and James invites everyone to sing along!