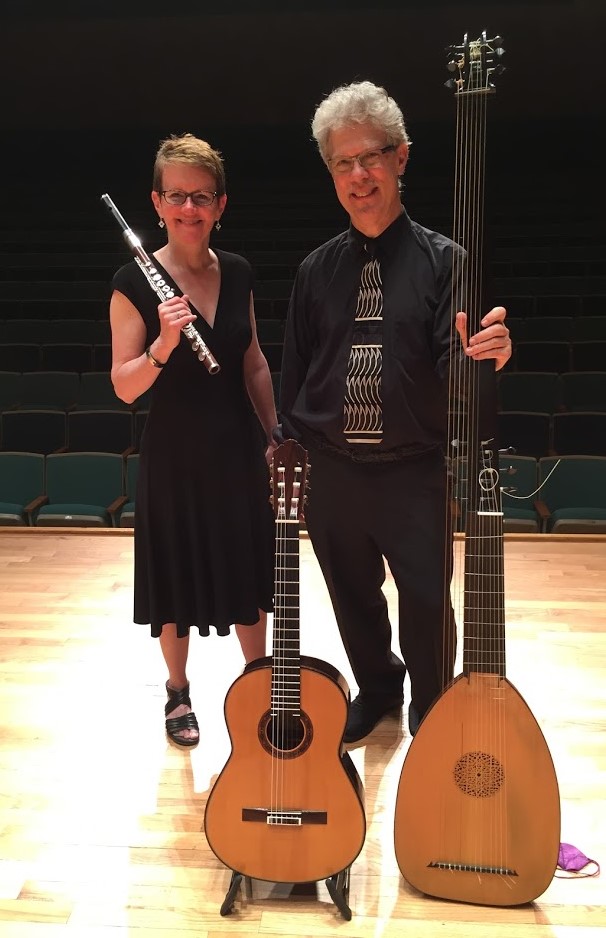 Duo Sonoro, comprised of flutist Nancy Schneeloch-Bingham and guitarist Douglas James, has been playing together for over 20 years. Both are accomplished soloists in their own right, have performed throughout the US and Europe, and are on the faculty of the Hayes School of Music at Appalachian State.

Besides playing the classical repertoire for flute and guitar, Nancy and Doug play the historical baroque counterparts of their modern instruments, specifically the traverso (baroque flute) and theorbo (bass lute). Their concert for the River House will feature all of these instruments, and will include music from the traditional Classical and Baroque eras, as well as some traditional Celtic music.

As an orchestral musician, Dr. Schneeloch-Bingham has performed with the Western Piedmont Symphony, Salisbury Symphony, Tallahassee Symphony, Winston-Salem Symphony, and North Carolina Symphony. She currently performs with the Symphony of the Mountains (Kingsport, TN) and the Johnson City Symphony.

An active recitalist and clinician, Dr. Schneeloch-Bingham has performed and presented workshops for numerous regional flute associations, as well as the National Flute Association and the Canadian Flute Association. A member of the NFA’s Historical Flutes Committee, she has served as its chair and has directed the NFA’s Baroque Flute Artist Competition and Masterclass.

Dr. Schneeloch-Bingham also performs, teaches and coaches chamber music at Cannon Music Camp, a comprehensive summer music program on the Appalachian State University campus. A passionate and innovative teacher, she has received the Outstanding Teaching Award from the Hayes School of Music, as well as the North Carolina Board of Governor’s Excellence in Teaching Award.

Douglas James has appeared as a classical guitarist throughout the United States as well as in Europe and Mexico. He has been a featured recitalist at such notable venues as Italy's L'Estate Chitarristica sul Lago Maggiore, the Stetson International Guitar Workshop, Oberlin Conservatory, and New York's Carnegie and Merkin Halls. He has won top prize in the Arturo Toscanini Solo Guitar Competition (Italy), and twice has been awarded a National Endowment for the Arts Solo Recitalist Fellowship. James often features 19th century instruments in his performances of the Classical and Romantic literature, and plays regularly in a period guitar duo with the Italian guitarist Pasquale Rucco. James also performs historical baroque instruments, and regularly plays theorbo with the ensembles Corde Cantanti and Harmonia Baroque.

Douglas James has recorded three critically acclaimed CD's for the Cala Vista label. The first, Italian Romantic Music of the Early 19th century, featuring solo guitar music, was followed by two in duo with Pasquale Rucco, Early Romantic Music for Two Guitars, and A Night at the Opera. Gitarr och Luta (Sweden) notes that "Douglas James' playing on the record is for my taste totally splendid. His enthusiasm to explore the early guitar repertoire is obvious, and he has an ability to use the old instruments to their full capacity, with all of their timbral possibilities. He plays intensely and sensitively with flow, ease and elegance." Classical Guitar (England) states, "Douglas James clearly has a great deal of sympathy for this repertoire and a carefully worked out approach to its interpretation ... everything is animated by concern for the life of the music on its own terms and in its own time. This is a welcome addition to the choice of 19th century repertoire played on genuine instruments of the time."

A third Rucco-James Duo CD is currently in production.

Douglas James holds a Doctor of Musical Arts degree from the University of Arizona where he studied with Thomas Patterson. Dr. James is a past member of the Board of Trustees of the Guitar Foundation of America, and directs the annual Appalachian GuitarFest.