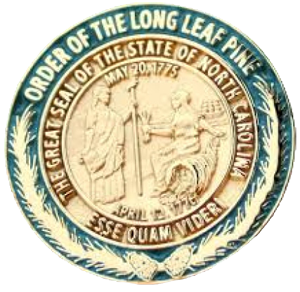 "Gayle Winston is a legend in western North Carolina. She's known for her gracious hospitality and her devotion to the arts, especially to North Carolina's traditional mountain music," said Perdue. "She is very deserving of North Carolina's highest civilian honor," the Governor said.

Winston, who is the proprietor of the River House Inn and Restaurant in Grassy Creek and the Old Salem Tavern in Winston-Salem, was selected by Governor Beverly Perdue for this honor for her contributions to the hospitality industry, the arts and the people of North Carolina.

State Representative Cullie Tarleton (D-93), who nominated Winston for the prestigious award, made the presentation on behalf of Governor Perdue. "Gayle Winston is the personification of a true renaissance woman. Her involvement and leadership in the hospitality industry, travel and tourism and the arts has benefited citizens all across North Carolina. If ever anyone has earned this prestigious award, it's Gayle," said Tarleton. Tarleton represents Ashe and Watauga Counties in the North Carolina State House of Representatives.

Gayle Winston was born in West Jefferson. She is the daughter of mechanic Gywn Hamby and his wife Zetta Barker, a schoolteacher. As a young woman, Winston moved to Washington, DC, where she spent the years during World War II, and then onto New York City, where she became the city's youngest theatre producer at the age of 24. In New York, she met and married movie director Ron Winston and moved to Hollywood. In 1973, Winston began her career in the hospitality business and has owned and managed several inns and restaurants, including the River House and the Old Salem Tavern. Southern Living Magazine has named her one of the eight leading chefs on the southeastern United States.

Since returning to North Carolina, Winston has been active in community and business affairs in both Ashe County and Winston Salem. She is a devoted conservationist, dedicating much of her family land and property in Ashe County to conservation. In early July, Winston celebrated her 80th birthday and her many accomplishments with hundreds of friends and well wishers at a musical performance at the Ashe County Civic Center.

The Order of the Long Leaf Pine is one of the highest honors the governor can bestow on a North Carolina citizen. Created in the mid 1960s, the award is given to residents in recognition of a proven record of service or some other special achievement. The recipient receives a certificate and the privilege of proposing, at any time, the North Carolina Toast:

Here's to the land of the long leaf pine,
The summer land where the sun doth shine,
Where the weak grow strong and the strong grow great,
Here's to "down home," the Old North State!