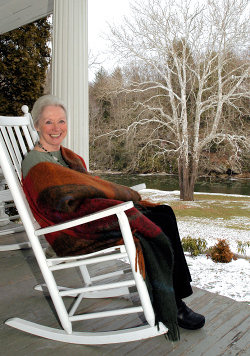 When Gayle Hamby Winston, '50, decided to leave a successful and vibrant life in New York to purchase her great-grandfather's farm in Ashe County, N.C., she told friends that she was finally going to pursue a "quiet" life after years of working as a journalist, a Broadway producer and a political fundraiser in the Big Apple. But those same friends knew better. "Gayle doesn't do anything quiet," says Nancy Hersch Ingram, who first met Winston in the 1950s. "Wherever she goes, she gets active."

Active is an understatement. In the ensuing 30 years, this attractive, vivacious Bridgewater alumna spent her "semi-retirement" running a major cattle farm, growing tobacco and operating five different gourmet restaurants. And since 1988, she has devoted nearly all her time to renovating and running the historic and highly acclaimed River House Country Inn, a bed and breakfast and restaurant located on the banks of the New River.

Now 75 years old, "plus one-half," she is proud to say, Winston enjoys a daily routine that would leave the average person exhausted. She wakes every morning at 5 a.m., makes breakfast for as many as 36 guests, answers the phone, takes bookings, greets guests and whips up her famous bread pudding and chocolate bourbon cake, as well as other desserts, for the inn's on-site French restaurant. In her spare time, she sews curtains and bed skirts, leads a charge to protect river land from development, fixes meals for the local Playwright's Project and preps for special events, like this past New Year's Eve celebration, when Winston and her staff took in a full house and cooked up a Brazilian feast of, among other things, braised short ribs, garlic sausage, black beans, collard greens and bananas baked in rum.

A reviewer once declared the inn as "elegant without a trace of pretension," and her guests — which have included a number of well-known novelists, artists and actors — clearly agree. One couple recently noted that River House was "the most personal place" they had ever visited, and another couple feels so at home that they now bring plants, trowels and shovels with them each year so they can help Winston with her landscaping. "We get the nicest people here," Winston says. "And of course, you make friends and they quickly become like family." That includes Pulitzer Prize-winning writer Annie Dillard, who stayed for a week and volunteered to feed the cat and show people to their rooms whenever Winston had errands to run.

Winston attributes her can-do attitude and zest for living to her years growing up among the hardscrabble mountain people of nearby Grassy Creek. Her mother, Zetta Barker Hamby, was a schoolteacher who, at the age of 87, penned "Memoirs of Grassy Creek," now in its third printing. Her father, a mechanic, taught his only daughter to be independent and a bit of a rebel, albeit a gracious one with flawless manners. "He used to say all the time, ‘Nobody's going to tell me what I can and can't do,'" Winston recalls. "I guess I took it to heart."

And she put it into action. Despite being a shy sort, Winston never let fear or doubt get in her way. While she was just 16 years old, for example, she took an exam for a scholarship to Bridgewater and got it. She studied English and Spanish, edited the school newspaper and dreamed of being a journalist specializing in foreign affairs. Though she had spent most of her life in small, rural towns, she moved to New York City after graduation from Bridgewater and quickly landed a job as a trainee in editorial research at Time magazine.

She was only there a short time when a copyboy named Leslie Stevens asked her to read a play he'd written. Afterwards, he asked Winston to act as producer for the play, though, she admits, "I didn't know anything at all about how to go about doing it." She quickly learned, though, raising the necessary money by talking "to everybody that you know and some that you don't know."

Winston and Stevens got the play, "Bullfight," booked in an off-Broadway theater, and it became a huge success, garnering excellent critical reviews, as well as 11-minutes on Ed Sullivan's "Toast of the Town." It also got Winston into the theater business full-time. "Once you get involved to the degree that I did, you're pretty much hooked," Winston admits.

She quit her job at Time and spent the next several years producing more plays, indulging her love for art, music and fine food, raising funds for the 1956 Adlai Stevenson presidential campaign and rubbing elbows with such 1950s celebrities as John and Robert Kennedy, actress Joanne Woodward, actor Paul Newman, writer-director Peter Masterson and Roger Stevens, the first chairman of the Kennedy Center. During that same time, she met and married Ron Winston, a film and television writer and director who, among other things, worked on the television shows "Playhouse 90" and "Twilight Zone."

"I absolutely loved living in New York," Winston recalls. "It's such a vibrant city and everyone was so kind to me. I never once had a bad experience."

Still, when her great-grandfather's farm came up for sale in the early 1970s, Winston leapt at the chance to own a piece of her rural past. "It seemed such a pity to let it go out of the family," she says. A year later, her husband died suddenly, and Winston decided to make a major change in her life, moving back to Ashe County for good.

She wasn't sure what she was going to do until one day shortly after arriving, a young local boy stopped by. He looked around her very quiet and empty 42 acres and told her: You know what you need? You need some cows. Winston recalls, "He happened to have some, of course, so I bought five cows."

Eventually, she was running cattle on over 1,000 acres of land (some purchased, some leased) and growing tobacco. During her busiest years, Winston took care of 350 head of cattle and harvested and sold 24,000 pounds of tobacco. "I did it all myself: doctored the cows, mowed the grass, planted the tobacco and then cut it, carried it and hung it in the barn," she says. "It was all very interesting."

Eventually, she wanted to do something more in keeping with her sophisticated New York lifestyle. In 1976, she and some friends started the Troutdale Dining Room in tiny Troutdale, Va. The menu was French-inspired, with "simple, but very interesting food," she says. "We baked our own bread, and we made our own ice cream, and we did everything, though we didn't make much money. But we did get very good reviews."

Winston would later acquire or start the Glendale Springs Inn in Glendale Springs, N.C., the Tavern in Abingdon, Va., Greystone Inn in Roaring Gap, N.C., and the Old Salem Tavern in Winston-Salem, N.C. She still owns and oversees the latter, along with River House, which she purchased in 1988.

She had always loved the riverfront property—an 1870 farmhouse that had long been in the family of James Larkin "Doc" Ballou, a surgeon, inventor and local philanthropist—and quickly devoted all of her time to turning the house and its various outbuildings into cozy retreats for weary travelers and vacationers. The outbuildings, which include a doctor's office, a caretaker's cottage and a carriage house, were all left in their original exterior state. So when guests walk up to the chickenhouse, for example, "they're always a little suspicious of what they've gotten themselves into," Winston laughs. But then they open the door to find, as with the other rooms, a king-size bed, a fireplace, a Jacuzzi whirlpool and Gayle's sophisticated but comfortable taste for books, paintings and antiques.

For all of her hard work and busy lifestyle, Winston always manages to make time for her many friends. Ingram notes that Winston has "always been there for me—whenever I've needed her" for more than 50 years. That included this past spring when Bridgewater officials invited Ingram, an acclaimed artist, to put on a major show of her works. Even though it was in the middle of her busy season, Winston made a point to attend and support her longtime friend.

"She is the hardest working, most multi-talented, most devoted person I've ever known," Ingram states. "She has high intelligence, high energy and high imagination, and that's a powerful combination that she's used to achieve some really amazing things."

Winston, for her part, humbly rejects such fanfare. She just chalks it all up to her willingness to pursue her interests — all of them — with gusto. "Really," she laughs, "sometimes, I think I've done all of these things because I still haven't decided what I want to do when I grow up."