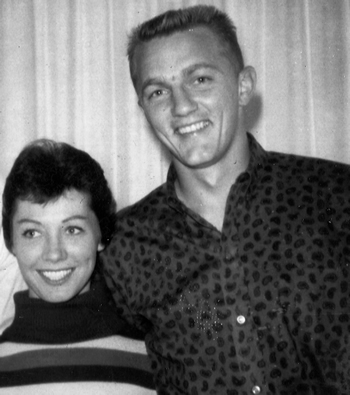 We've been talking about hamburgers a lot lately. On the menu for lots of top-notch restaurants, many have attained incredible heights! Four, five inches tall when adorned with layer after layer of onions, tomatoes, cheese (Well, OK) but mushrooms, bacon, artichokes, eggplant, pineapple, peppers? How do we get our heads around all that, not to mention our mouths!

Back in 1961, Quarter-back Y. A. Tittle was traded to the New York Giants from the Forty-Niners just before Del Shofner was acquired from the Rams. "The Tittle to Shofner" passes became legendary and led to three great years at Yankee Stadium and in all of New York.

Of course the two became famous very quickly but when they first arrived, my husband Ron and I were the only people they knew socially.

It was fun going to the butcher for the rare steak but often it was just hamburgers for dinner. Y. A.'s wife Minette really liked my hamburgers, wondered what I mixed into them, what they might be coated with, etc.

Actually the meat was handled very little, nothing added, no kneading, shaped gently into generous rounds. Sprinkle a hot skillet with salt, sauté the burgers on one side, salt the top and flip over.

Meanwhile, split English muffins, butter the open sides and brown lightly on a griddle or in another skillet.

Garnish with whatever you like, stack as high as you dare. Personally, I keep a low profile.