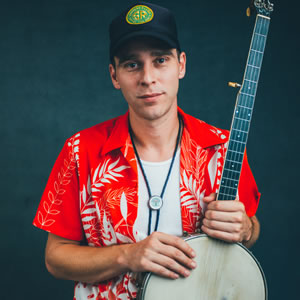 Brody Hunt is a Honky Tonk Singer, Blue Yodeler, and Old Time Fingerstyle Banjoist living in Asheville, NC. Growing up as an 7th generation native to the county in which he was born, in the fine state of Oregon, Brody was raised in a musical family, and early on in life began working in the woods cutting timber and does to this day. He is also a semi retired hobo/railroad tramp and a veteran "Knight Of The Road". He continues to ride 1-3 thousand miles annually on freight trains, across America. A collector and researcher of pre WW2 78 RPM Records himself, he also puts on the Asheville Shellac Bash, a world class gathering of vernacular 78 collectors and researchers from across the globe. He has a honky tonk band "Brody Hunt & The Handfulls" and a hillbilly stringband the "Carolina Cud Chewers".