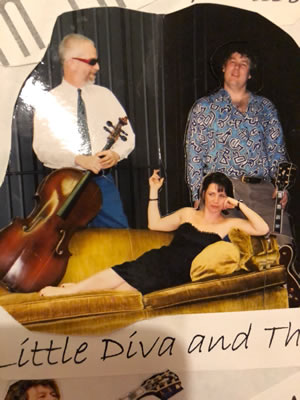 The Sally Walker trio features Sally on vocals, Jon Winnike on guitar, and Chris Prokosch on upright bass. The trio have been creating music together in various genre for many years, as well as working with many other bands and artists. Currently, the repertoire includes jazz standard arrangements-including songs from the “Great American Songbook”- The group enjoys exploring unique arrangements of blues and popular music as well. Lookiing forward to ringing in New Year 2019 with everyone at The River House!

Calling Floyd, Virginia home, Sally has been a fixture on the regional jazz/blues scene for many years, playing venues from Charlottesville to Richmond and down into southwest Virginia and North Carolina. Sally studied music and voice at Radford University, and professionally practices as a music therapist and vocal coach. She currently has a CD of jazz standards titled “Got The World On a String”.

Jon is an accomplished guitar and bass player. Jon enjoys playing across a spectrum of genre, including standard jazz, blues and rock .Jon is a member of Roanoke based big band Sway Katz, blues-rock band Jam Sandwich, and an African music based group. Jon is also a founding member of FMJP, a regional jazz quartet.

Chris is a regionally renown bassist, having played with many of the areas finest jazz players. Also a co founder of FMJP, Chris actively books jazz gigs with Virginia Tech and other venues.